[Report] The 38th PoP Seminar : The Ethos of Science Advice 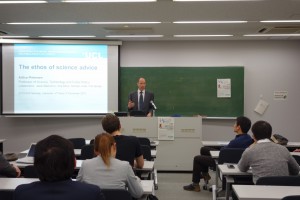 Abstract:
There are many theories that can inform analysis of how science advice is done or should be done. Here Professor Petersen defines “science advice” as “practices involving individuals, organisations and structures that mobilise natural and social scientific and engineering knowledge into public decision-making”. In this seminar, he argued that although some theories are well elaborated, empirical proof for the described changes, roles and processes in scientific advice is limited. After reviewing literature and outstanding questions on roles of scientific advisors at local, national and international levels, he offered a pragmatist analysis of the Intergovernmental Panel on Climate Change. Subsequently, he assessed capacity-building needs in science advice across a range of cultural and political contexts, and governance scales: What skills do future science advisors and recipients of science advice need to deal responsibly with their tasks? He concluded with presenting elements of an ethos of scientific advice, which are based on experiences with implementing post-normal science at the PBL Netherlands Environmental Assessment Agency.
Presentation Slides: 20151106 STIG University of Tokyo – Petersen

Biography:
Professor Arthur C Petersen (DPA PhD MA MSc) joined UCL STEaPP fulltime in September 2014 after more than 13 years’ work as scientific adviser on environment and infrastructure policy within the Dutch Government. Most recently he served as Chief Scientist of the PBL Netherlands Environmental Assessment Agency (2011–2014). Arthur is also Adjunct Professor of Science and Environmental Public Policy at the VU University Amsterdam (since 2011) and Research Affiliate at the Massachusetts Institute of Technology (since 2009), and has been Visiting Professor at the London School of Economics and Political Science (2009–2014) and at UCL STEaPP (January–August 2014). Arthur studied physics and philosophy, obtained doctorate degrees in atmospheric sciences (Doctor of Philosophy – PhD, Utrecht University, 1999) and philosophy of science (Doctor of Public Administration – DPA, VU University Amsterdam, 2006), and now also finds disciplinary homes in anthropology and political science. Most of his research is about managing uncertainty.